The Truth About Patent Trolls

Hypothesis 1: Most Patent Assertion Entities are drivers of innovation, and incorrectly labeled as patent trolls.

Method 1: Find list of PAEs, sort by location, number of lawsuits filed, damages. Need to control for size of company and sector.

² 79% of cases filed in Southern District of Florida

A patent infringement case can be filed in any of the US districts that have personal jurisdiction over the defendant, which include states or districts where the defendant's products are sold, regardless of whether or not an office exists in that location. [1] The large number of cases filed in E.D. Texas could point to the favorable disposition of the court patent holders. See Eastern District of Texas.

Method: Find a reliable graph of developments within the technology sector and match it to the one below [2]: 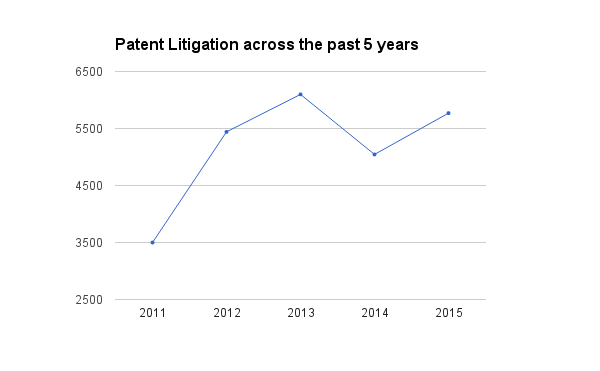 Sub-Hypothesis: There's something fishy going on with Judge Rodney Gilstrap

Hypothesis 3: Data that supports increased costs to innovation rely on broad and confusing definitions for NPEs and PAEs

Hypothesis 4: Patent legislation should not be targeting the reform of demand letters

Recently proposed legislation includes changes to the form of demand letters. The Innovation Act in particular requires the party alleging patent infringement to include in the initial complaint:

TL;DR If you believe your patent has been infringed on, you must write in your initial complaint letter VERY SPECIFIC information regarding exactly which parts of your patents have been violated and by what model/device.

If patent trolls are rampant, this measure could reduce the amount of demand letters they send out and the number of companies they accuse of infringement. However, patent holders that have a legitimate concern may find it hard to identify the exact make and model of the device(s) that infringe upon their patent, especially in the high-tech sector where products are less clearly defined.