This page contains summaries, explanations, and data pulls from some of the most cited papers related to patent trolls. Information on this page will be used for The Truth Behind Patent Trolls Issue Brief.

The $500 billion of lost wealth is calculated by measuring the loss in stock price after the announcement of a patent lawsuit.

NPE list is taken from [Patent Freedom https://www.patentfreedom.com/], which is owned by RPX Corporation. RPX Corporation provides services to defend against NPE lawsuits.

RPX Corporation's business model of litigation protection services may benefit from an increased number of NPE lawsuits, especially those that they claim were defended effectively due to RPX Corporation help. A conflict of interest exists for RPX between providing accurate database information and inflating numbers to generate more revenue for the business.

RPX explains how they define PAEs[2]:

"• RPX identifies public PAEs through a manual review process performed by experienced employees with knowledge of the patent industry. • The process includes, among other things, reviewing public filings; searching for evidence of operating or patent monetization activities on the Internet, including company websites; reviewing complaints, with a focus on accused products and allegations regarding products and/or services sold by the patent owner; considering the outside counsel employed by the entity (e.g. whether outside counsel has a history of representing public PAEs); reviewing corporate disclosure statements filed in litigation; and soliciting market intelligence from patent professionals. • The public PAEs for this particular report represent the largest, most established public PAEs as well as several recently formed public PAEs that have become public via reverse mergers. • While there are elements of subjectivity in this approach, RPX believes that the process is robust based on feedback from other patent professionals "

Public PAEs are under performing the market (based off share price). If PAEs are not making enough money, will they become desperate and sue more firms, or reduce their assertion activities because of high court costs?[3] 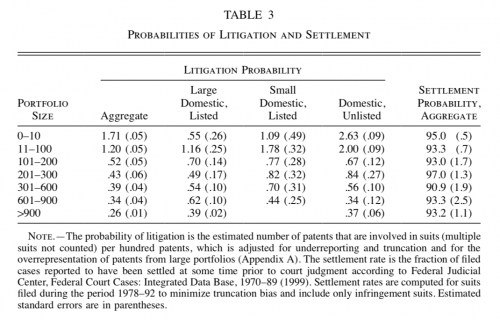 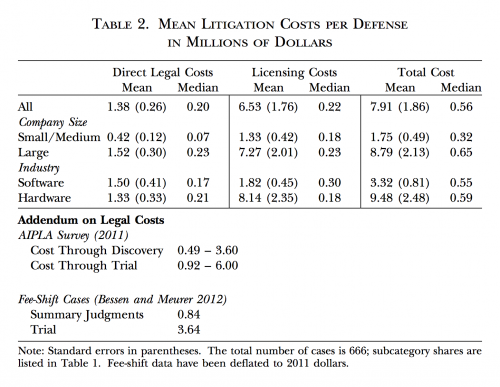 Survey utilizes a small sample size that was not randomly selected and that is mostly composed of large companies that are more likely to be public and to be sued.

Average costs are generally much larger for large companies than for small and medium-sized companies.

Conflict of interest mentioned above in Bessen, Ford, Meurer's 2011 paper.

This study was mandated by Section 34 of the Leahy Smith America Invents Act. The purpose of the study was to determine the consequences and effects of NPEs on patent litigation.[4]

Criteria for defining a PAE versus an operating company.

Reasons why ED Texas is a popular venue: