The objective of this project is come up with a fast, reliable algorithm that finds the smallest circle area that can drawn around N Cartesian points such that each circle contains at least M<N points. This algorithm will be used in an academic paper on Urban Start-up Agglomeration, where the points will represent venture capital backed firms within cities.

This program takes in a set of points and the minimum number that should be included inside a unit, and returns circles of the smallest total area which encompass all of the data points. Function make_circle and all of its helper functions were taken from https://www.nayuki.io/res/smallest-enclosing-circle/smallestenclosingcircle.py.

Update 04/26/17: The most recent Enclosing Circle algorithm is EnclosingCircleRemake.py. I believe that in the past there was an issue with the way that I selected the next point to go into the circle. I was previously choosing the point closest to the arbitrary starting point, rather than the point closest to the center of the new circle, which was pretty illogical. EnclosingCircleRemake should fix this error, but it needs to be tested pretty thoroughly before I am ready to run it on the large data set.

Input: A sequence of pairs of floats or ints, e.g. [(0,5), (3.1,-2.7)]. Output: A triple of floats representing a circle. Returns the smallest circle that encloses all the given points. Runs in expected O(n) time, randomized.

The original script is located in:

Inputs: A set of points, a minimum number of points to include in each circle.

1) Find a point on the outside of the set of points by choosing the rightmost point in the set.

3) Sort the points by their distance from starting point (using distance formula). (Changed in enclosing circle remake! Choose the next point to be the one closest to the center of the previous core.)

4) Create a list of points called "Core." The core should contain starting point and the n - 1 points that are closest to it. This is the smallest circle that contains starting point.

6) Add one point (the next closest one to starting point) to the core and then repeat step 5.

7) Repeat step 6 until there aren't enough points outside of the core to constitute a valid circle.

8) Choose the scheme that resulted in the smallest total area.

The algorithm relies on an object oriented implementation of a "cluster".
Each "cluster" has the following associated with it:

Runtime: The runtime of the minimum enclosing circle is O(n), and the runtime of constrained k-means depends on k itself. Here, the value of k is proportional to the total number of points.
We would expect the algorithm to slow as the number of points increase. For reference, a set of 80 points with n =3, took about 30 minutes.
Further improvements could implement an early-stopping method to converge to a local optima.

The K-Means based algorithm returns the optimal solution, albeit slower 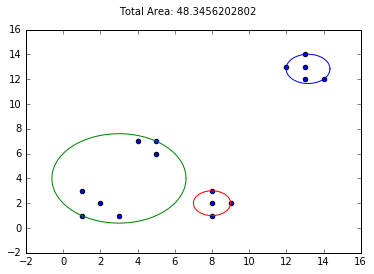 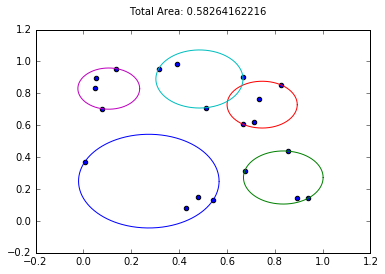 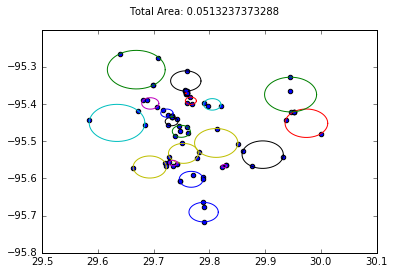 1) Final all combinations of two points in the total data set.

In my first implementation of EnclosingCircle (EnclosingCircle.py), there is a mistake in my memoization scheme where I had been setting a variable equal to a "scheme[1].sort()", forgetting that the sort function operates in place and returns None. Thus, the memoization scheme was being used randomly and excessively such that not all possible circles were calculated and incorrect results were returned (hence the subsuming circle nonsense). Another mistake in the original algorithm was that when we were choosing the next point to add to a given circle based on how far it was from the first point I chose in the circle, rather than from the center of the circle. I corrected this by recalculating the circle every time I add a point and then sorting the rest of the points based on their distance from that center. Unfortunately, this code works very well and produces correct results where the original algorithm did not, but runs incredibly slowly. I do not think that it is feasible to use this algorithm on the volume of data that we need to analyze. I am currently running an example with 81 points (Houston 2012) split into groups of at least 4 and will report statistics on it soon.

One major holdup of the new algorithm (besides the fact that it calculates a ton more circles) is the recalculating of the center point every time I need to add a new point to the circle, which seems a bit absurd. I think it might be faster to adjust the center of the circle heuristically so between the first two, take the average x and y coordinate. For the next addition. Take a weighted average of the three points. Etc. I am not sure if this would work out mathematically but I can work it out and see. This might cut down on runtime, but we still need to calculate the distance from each individual point after that, which also takes a long time. This could possibly be resolved heuristically as well, since I don't really need to calculate all the distances since points that were really far from the circle before probably aren't going to be chosen anyway. I can look into implementing some of these algorithmic changes and testing them on Monday and Tuesday.

In the longer term, I would recommend trying to parallelize the algorithm, possibly with python threads or implementing it in java and using the constructs there. I do not know if I will have time to start this before the summer, but there are many processes that can be run in parallel for this algorithm so I think it is a good strategy.

Specifically, all calls to findgroups can be run in parallel so long as you wait to receive the results from all the threads before deciding on an answer. For example imagine a system with 5 points split into groups of at least 2. There would be one call to findgroups on all 5 points, then calls to findgroups on a 3-2 split and on a 2-3 split. Those two calls could run in parallel, as long as the result from the call on all 5 points waits to receive the results from both children threads before deciding which is the optimal solution. You would have to be careful to keep threads from writing to the same memory (specifically for the removals in pointset), but I think (depending on how many cores our system operates on) this could incur impressive speed up.

Update: Did not incur any speed up by implementing changes the the calculation for center or distance. Reading about python threads https://pymotw.com/2/threading/

Update: Implemented a thread version of the program and am running that in addition to the non-threaded version to see how the timing compares. EnclosingCircleRemake2.py. How the threading works:

1) Split the pointset into all its initial possible schemes (one split).

2) Divide these schemes amongst four threads.

3) Have each thread compute the best outcome of each of those schemes and put them into a global array.

4) Join all the threads.

5) Have the main function iterate through the schemes returned by the threads and choose the best one.

6) Create circles for the schemes and return them.

On preliminary examples, the code works correctly. It actually runs slower than the original algorithm on small examples but I suspect that is the overhead of creating the threads and that they will be useful to the large examples.

If the point of the project is to solve an application, the Not-Invented-Here approach is doomed to fail. Instead, I suggest an approach where

On preliminary analysis, the brute force approach to the enclosing circle algorithm runs O( n!), where n is the number of pairs in the input sequence.

The relevant files are located in:

The results may eventually be plotted to a graph using python as well. Here is documentation for a python library called basemap.

CURRENT STATUS: Bug fixes needed in EnclosingCircle.py. The program errors with a key error on line 187 in cases where n is not a multiple of the length of the dataset. I made some temporary fixes to the enclosing circle file located in the above directory, but I am not certain if it is a permanent fix.

Speeding up with C

With the large amount of VC data we have, the enclosing circle algorithm would take an extremely long amount of time to run (on the order of weeks/months). If we can compile the code into C, we can speed up runtime dramatically. I've listed some possible sources for running python code as C.

Cython. Documentation here. Basic tutorial for Cython is given here.

Currently, the RDP is missing a compiler to run Cython successfully. The error that appears is "unable to find vcvarsall.bat".

Getting a C++ Compiler

These are proposed fixes to solve the Cython error shown above. A possible C++ Compiler for Python can be downloaded directly from Windows here.

The C++ Compiler for Python has been downloaded and installed. Instructions for installation and uninstallation can be found here.

The Installation file is located in :

The test files can be found in the following:

The basic tutorial for cython can be found phttp://docs.cython.org/en/latest/src/tutorial/cython_tutorial.html here].

Essentially, a setup.py file needs to be created with the following format:

Then, after changing to the proper directory, execute the following from the command line

This will wrap your python program in C, and produce a filename.pyd file.

To use this new python code wrapped in C, simply import the pyd file as if it were a python file:

Treat this file as any other module. It will work just as if it were in Python, except it exhibits a faster run time.

NOTE: We fixed Enclosing Circle and drastically improved its runtime, so we decided to go with its Python implementation.

Documentation for multiple ways in which this can be done can be found here.

A GitHub example can be found here.

An advanced and detailed tutorial can be found here.

A step-by-step Tutorials Point guide can be found here.

A data set with city, state, company name, year, and geocoded coordinates can be found at:

NEXT STEP: We need to determine how many companies we want in each circle, and then we can begin running the enclosing circle algorithm on the city data.

Data on the Top 50 VC Backed Companies can be found here.

These were determined by the decide_cities.py script located in:

The final data of cities at a given year and their minimized circles can be found at:

You can plot this data onto a map using the script located: