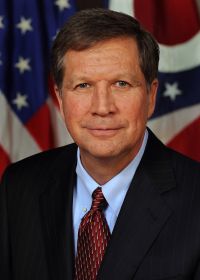 Tax Cuts for Individuals and Families:

Lowering income tax rates, reducing the number of brackets, and increasing the Earned Income Tax Credit will allow all taxpayers, especially low and middle income earners, to keep more of their own money and be better able to save and invest for the future. l

Tear Down Barriers to Innovation:

The Kasich Administration will launch an independent, top-to-bottom review of the Internal Revenue Service and its practices with the goal of improving simplicity, fairness and integrity. No more will the IRS be used to target individuals or groups based on ideology or other irrelevant factors. (JKWTR)

Washington should provide more flexibility from rigid guidelines so states can align programs to the skills and positions for which local job creators are hiring. Issuing block grants to the states while streamlining multiple programs into a few large grants will afford them the opportunity to be innovative and responsive. To be successful and accountable, states will need to ensure their efforts prioritize the following principles:

Link Basic and Applied Science to Put New Ideas to Work and to Create Jobs:

The National Institute of Standards and Technology (NIST) is a powerhouse of scientific know-how, with strong industry relationships via its standards-setting work. Additionally, the National Technical Information Services (NTIS) collects and disseminates scientific and technical information from government-funded research to expand knowledge. To help get new ideas out of the lab and into the marketplace—a longtime priority of Gov. Kasich—he would merge NIST and NTIS with the basic science research functions of the National Science Foundation. This new combined science center would create a well-aligned pipeline from basic research, through applied research and into industry, while also providing a robust platform for disseminating new breakthroughs. NIST’s programs in support of manufacturers would be separated and merged with the Small Business Administration to provide these job creators a more seamless one-stop experience for the support they need. (JKWDW)

The cost of entitlement programs like Medicaid and Medicare are growing uncontrollably and must be fundamentally reformed to reduce their growth rates and become more efficient while still providing the services that Americans want and need.

Sending mixed signals to kids about drugs is a disaster. Drugs is one of the greatest scourge in this country, and I spent five years of my administration working with my team to do a whole sort of things to try to reign in the problem of overdoses, and it goes on and on. We could do a whole show on that. (Source: CNBC 1st-tier debate Oct 28, 2015)

Open New International Markets, but Get Smart About Unfair Trade

When American products and services are accessible around the world American businesses and workers benefit. Trade also enhances global security and stability. It can’t come at the cost of common sense, however. If other countries want access to the American market they should provide access to their markets, and trade violations must be quickly addressed to prevent significant economic damage to businesses and workers.

"TPP, it's critical to us, not only for economic reasons and for jobs, because there are so many people who are connected to getting jobs because of trade, but it allows us to create not only economy alliances, but also potentially strategic alliances against the Chinese. They are not our enemy, but they are certainly not our friend." (Onetheissues)

In 1986 Ronald Reagan basically said the people who were here, if they were law-abiding, could stay. But, what didn't happen is we didn't build the walls effectively and we didn't control the border. We need to control our border. But if people think that we are going to ship 11 million people who are law-abiding, who are in this country, and somehow pick them up at their house and ship them out to Mexico, think about the families. Think about the children. So, you know what the answer really is? If they have been law-abiding, they pay a penalty. They get to stay. We protect the wall. Anybody else comes over, they go back. But for the 11 million people, come on, folks. We all know you can't pick them up and ship them across, back across the border. It's a silly argument. It is not an adult argument. It makes no sense. (Source: Fox Business/WSJ First Tier debate , Nov 10, 2015)

Q: in 1993 you co-sponsored a bill in Congress that would take away "birth right citizenship": that is the citizenship automatically given to babies born in the US, even if they are born to undocumented immigrants. In 2010 you reiterated that, is that still your position? A: First of all, we ought to finish the fence. The 11 million who are here, we ought to find out who they are. If they've been law abiding over a period of time they ought to be legalized and ought to be able to stay here. If you have violated the law, we're going to ship you out. Once that fence gets built, we should make it clear, anybody who sneaks in, you're going back home. And in addition we need a guest worker program so that people can come in and work and be able to go back to support their family. Q: Would ending birthright citizenship be part of this larger immigration approach? A: I don't think we need to go there. (Source: CNN SOTU 2015 interview series: 2016 presidential hopefuls , Aug 9, 2015)

“Radical doesn’t work. It’s inconceivable that we would start to round up 10 or 11 million people and start to ship them out of the country. "

Keep Energy Affordable And Reliable by Pursuing All Sources of Energy:

Diversifying our energy supply is the best strategy for economic growth. Government policies that encourage or discourage energy from any single source are economically counterproductive.

Sourcing all our energy from North America and eliminating our reliance on overseas energy makes America safer and stronger.

Use Common Sense In Energy Regulation:

Washington assumes authority that does not exist in pursuit of reckless regulations that will kill jobs. John Kasich will bring common sense and science to energy regulation in order to properly balance environmental stewardship and job creation.

Both the economy and environment benefit from technological breakthroughs. High-capacity, long-life batteries; fuel cells; the high-efficiency “smart” electricity grid; clean coal and other technologies can help improve the environment, increase efficiency and conserve energy. Unreasonable barriers to their development should be identified and removed to help make them a reality. (JKWE)

Stewardship of the environment is nothing less than a moral obligation -- because God made it and gave it to us to properly manage. It will be part of the bequest we make to our children and grandchildren. We should take care of it. If we intend to provide a better life, and a better world, for future generations, we can’t ignore the quality of the environment we leave them. (Source: Speech to National Environmental Policy Institute, 4/27/9 , Apr 27, 1999)

For nearly 30 years, we have behaved as if protecting the environment was somehow at odds with the economic growth and prosperity that also are so important to us. This is a false and dangerous dichotomy; it forces unnecessary divisions between those who want to protect the environment and those who want economic progress. [We must get past] the “us- versus-them” rhetoric.. Economic progress and environmental conservation can and must go hand in hand for the sake of this generation and the next. (Source: Speech to National Environmental Policy Institute, 4/27/9 , Apr 27, 1999)

Note: These quotes are both from 1999

Kasich has made it clear that he does not necessarily believe their should be a distinct delineation between church and state. During his speech at the National Press Club in Washington D.C., Kasich asserted his plan to create a governmental agency responsible for proselytizing Judeo-Christian religious values to areas of the world including: Russia, China and the Middle East. Furthermore, Kasich believes the key to fighting Islamic extremists is to band together under a common set of Western religious values, and vehemently opposes recent trends towards secularism. (AU)

“U.S. public diplomacy and international broadcasting have lost their focus on the case for Western values and ideals and effectively countering opponents’ propaganda and disinformation. I will consolidate them into a new agency that has a clear mandate to promote the core Judeo-Christian Western values that we and our friends and allies share.” - John Kasich speaking at the National Press Club (NYDN)

“Its job would be fundamentally to revive what we used to do when we beamed messages into the former Soviet Union. We need to beam messages around the world about what it means to have Western ethics … to be part of a Judeo-Christian society,” - John Kasich at an interview with NBC news (NYDN)

“If we become secularists when we face a radical Islam, that is the farthest thing from secularist, when we can’t unite with our friends in the Jewish, Muslim and Christian community to espouse a set of values that is the true way for human beings to conduct their lives and live their lives, we will be in a very severe crisis point.” - John Kasich at the U.S. Hispanic Chamber of Commerce in Washington. (TH)

The Governor is a strong supporter of Israel and has publicly disparaged the United States' attempts to pressure Israel into peace negotiations during the conflict with Palestine. The governor went on to assert at a Manchester business forum that perpetual peace is an unlikely goal and instead Israel should seek out stability. Kasich has also criticized the Obama administration on numerous accounts for their handling of the Israeli crisis and remarks that the administration should have handled the conflict with more discretion. (FW)

"You can't separate this U.S.-Israel relationship," John Kasich to The Washington Post.a (BU)

"I think the administration has probably fallen in love with the fact that they want to get an agreement, and when people are hyperventilating and unable to get one, sometimes they go and they sign something that they shouldn't,"Kasich to Fox News (BU)

Under his administration, Kasich has increased the number of school vouchers that use public money to pay for predominately religious private schools. Some estimates have measured the amount of vouchers using public money to cover the tuition of religious private schools to have doubled under Kasich. (WP) Kasich has also instituted a school mentorship program with a stringent religious requirement. Kasich has budgeted ten million dollars to bring mentors into Ohio schools for students, however, there is a special religious provision. Schools eligible to receive the state funding must partner with a church or faith based organization. (CLV)

We Must Protect the West

Kasich has asserted that the US has not done enough to combat the actions of the Islamic State. Additionally, he firmly believes the state is a threat to Western values and ideals. Kasich proposes the idea of a coalition against the Islamic state made up of European and Middle Eastern allies to expedite efforts to defeat the terrorist threat. (TM)

"We must join a coalition with our European and Middle Eastern allies to defeat and destroy ISIS on the ground. Bombings are not enough." -John Kasich (TM)

"ISIS, with their brutal attacks on women, their beheadings and their attacks on people of faith is at war with civilization." -John Kasich (TM)

"Unless we want to see the blood spilled in Paris flow here in America and in the streets of our allies’ capitals, we need to get serious about wiping ISIS off the map." -John Kasich (TM)