On Friday, April 8th 2022, two UVM administrators presented a draft of the 2022 Vermont Science and Technology Plan on behalf of the Vermont Technology Council, which is currently chaired by David Bradbury, founder of VCET.

On Thursday, April 14th, I returned to the public comment form to find it closed.

Census data would be relevant to the report in a number of places. This section provides two examples. 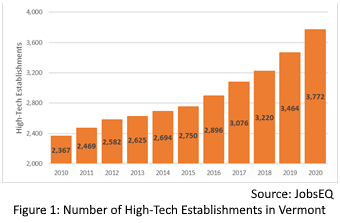 The source of the data for these claims and Figure 1 is "JobsEQ": https://www.chmura.com/software. The figure shows an annual average growth rate of 5% (compounding to 60% over ten years), which is strong, particularly for a state like Vermont, but not impossible. The scaling of the axis makes it look more dramatic.

The Business Dynamics Statistics data from the U.S. Census is the standard data source for entry and exit and is available at the state-NAICS2 level from 1978 to 2019 (an update is due). There are numerous well-documented issues with using BDS, including that it measures establishments, not firms, and that the Census restricts access to sparse data. See the American Community Survey (ACS) Data page for related information. 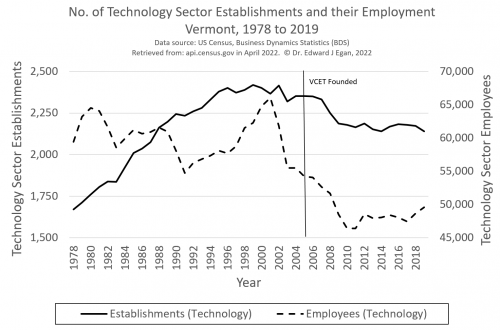 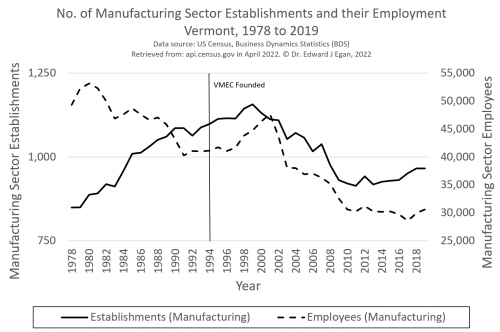 Restricting the data to just NAICS 31-33 shows that manufacturing in Vermont:

Grant data would be useful in several places in the report. For example, the report states (p5): 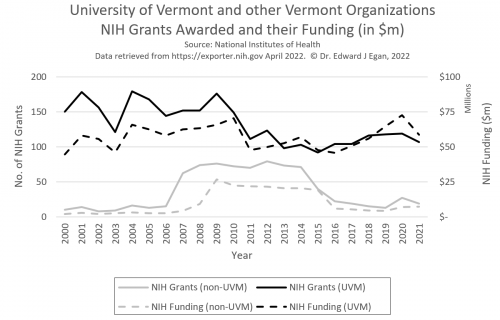 I had Federal Grant Data from the NIH to hand from another project and updated it to 2021. It shows that:

I pulled data from the US Startup City Ranking project, which also provides state rankings, and draws data from VCDB20 to make some graphs showing Vermont's VC over time. Vermont's VC is so small that it is dwarfed by year-to-year national variation, which is one or two orders of magnitude larger. So, as much as we might want Vermont to be something, it is currently very much a rounding error. Its state rank has mostly oscillated between 35 and 40. Its current contemporary states include Alabama, Louisianna, Montana, and Idaho, none of which can be considered successful for their entrepreneurship. Its five-year moving average rank suggests that Vermont's most recent peak was 10 years ago. 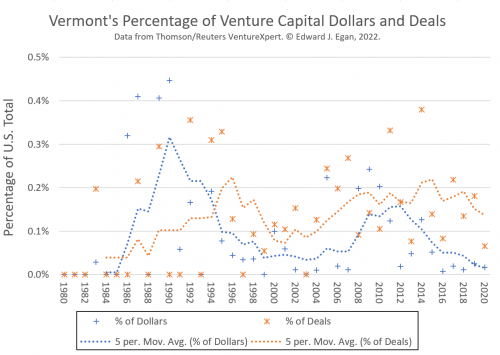 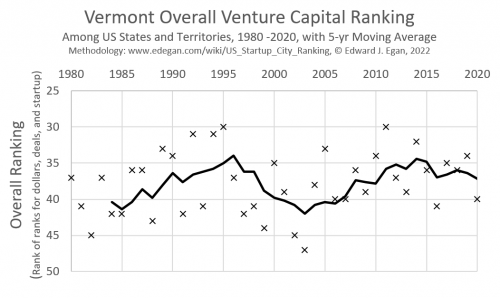