The Texas Franchise Tax is a business tax imposed on all companies and corporations in return for state liability protections for doing business in the state. In 2006, the tax was rewritten in attempts to raise annual state revenue. In 2015, Governor Greg Abbott signed a legislative bill to decrease tax rates by 25%. These changes to the franchise tax make Texas a favorable business climate in terms of taxes, especially for smaller corporations.

Currently waiting on feedback from Anne to make edits.

What is the Texas Franchise Tax?

The Texas Franchise Tax, commonly known as the "margin" tax, is a business tax that has been in place in Texas since the 1880s. Businesses are required to pay this tax as a fee in return for liability protections under state law that allow them to be legal, separate entities from the state. It is also known as the "privilege" tax, to signify the "privilege" of doing business within the state. For most of the 1900s, the amount paid by the business depended on its net taxable capital (taxable capital gain minus loss, such as debt). But in 1991, the franchise tax was changed to include "earned surplus," which not only includes company profits but also compensation for directors and officers. The Texas Franchise tax is based off of specific rates of a business' taxable margin rather than a minimum amount. According to Comptroller.texas.gov, the taxable margin must be computed in one of the following ways:

Recent Changes to the Franchise Tax

In 2006, Texas lawmakers made radical changes to the Franchise Tax in an attempt to raise revenues. According to the Texas Taxpayers and Research Association (TTARA), the franchise tax was rewritten with following policy goals in mind:

Before these sweeping changes, the franchise tax only applied to corporations and limited liability companies (LLC). After 2006, the tax not only extended to partnerships and professional associations but also became a mixture of a tax on gross receipts as well as income, without fulling transforming into either of the two types of taxes.

In 2015, Governor Greg Abbott signed into law the legislative bill HB 32 that decreases tax rates by 25% starting from January 1, 2016.

For tax reports due on or after January 1, 2016, these changes reduce rates of:

Before this bill was signed into law, tax rates in 2015 were temporarily lowered to: 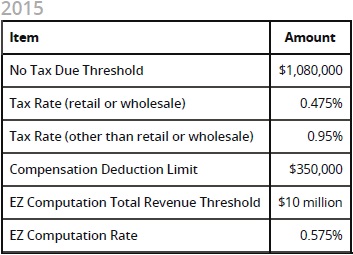 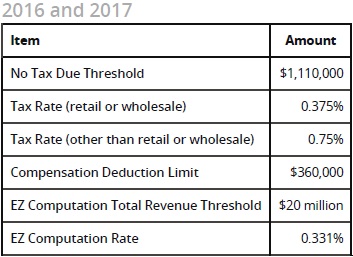 Texas fosters a favorable tax environment by enforcing franchise taxes that are significantly lower than those of other states and not imposing a personal income tax. This is especially helpful for small businesses that are struggling to establish themselves and grow in their first years. Business that earn less than the EZ Computation Total Revenue Threshold of $20 million in annual revenue can instead file taxes through an EZ Computation Form that has a further reduced tax rate than the normal franchise tax (0.331%). Furthermore, Texas has a no-tax-due threshold of $1.1 million, which means that businesses that have a total annual revenue of less than or equal to $1.1 million are not required to pay any franchise taxes.

This information is taken from https://comptroller.texas.gov/taxes/publications/98-806.php:

Each taxable entity formed in Texas or doing business in Texas must file and pay franchise tax. These entities include:

Entities Not Subject to Franchise Tax