UVM has recently experienced a dramatic and precipitous drop in rankings of patents granted to universities. However, those rankings use ten-year cumulative patent grants, and patents currently take two years on average to be processed by the USPTO. Moreover, UVM could conceivably have been granted increasing volumes of patents but failed either to keep up with its peers or with patent inflation, resulting in a relative decline. 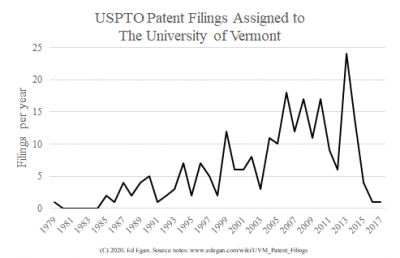 The dropoff in patenting over the last five years is so large that I immediately suspected a right-truncation issue. However, the USPTO data underlying Google's Public Patent Data dataset does appear to have applications in it. The grant date is set to 0 whenever the patent isn't granted. Moreover, the USPTO processing time just isn't that long... So, instead, the results are suggestive of a structural change in UVM's patenting activities somewhere around 2013.

UVM's 26th President, Tom Sullivan, began his term in July 2012, and hired/appointed much of his administration in the following two years. Richard Galbraith was appointed VP of Research in July 2014. Suresh Garimella became the 17th President of UVM in October 2019. Garimella previously had notable success in spurring the development and commercialization of technology at Perdue University, where he was the inaugural Executive Vice President for Research and Partnerships.