Some recent articles suggest that a Donald Trump presidency would be bad for the U.S. economy, or at least bad for investors in the markets. One way to address whether this is true is to examine the relationship between Mr. Trump’s poll numbers and the market.

We took Donald Trump’s daily poll numbers from the Real Clear Politics National Average Poll data and the close-of-day price for the Dow Jones Industrial Average from the 19th of July, 2016– the date that Mr. Trump officially became the Republican party nominee – to the 5th of October, 2016. We then estimated the relationship between them using Ordinary Least Squares.

The results are striking: A one percent increase in Donald Trump’s poll numbers are associated with a 65 point decrease in the Dow. 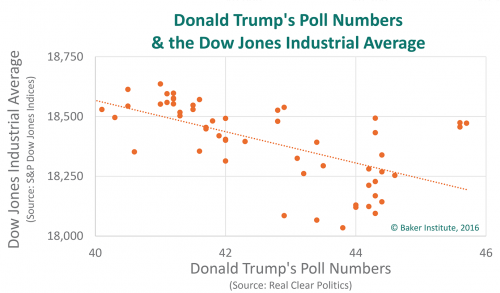 The correlation between Donald Trump’s poll numbers and the performance of the Dow is highly statistically significant. The odds of finding this correlation by chance are less than one in ten thousand.

Donald Trump’s poll numbers explain 38% of the variation in the Dow. This is surprising, as many, many factors affect the Dow’s closing price. It suggests that the markets are really concerned with the outcome of the 2016 presidential election.

As any econometrician will tell you, correlation does not imply causality. All of the following, and more, are possible:

We included a range of other explanatory variables, including time trends, total U.S. debt and the 10-year bond rate, in a multivariate analysis. The effect of Mr. Trump’s poll numbers remained highly statistically significant. However, the magnitude of the decrease in the Dow was reduced to around 45 points for every 1% increase in his poll numbers.

The Dow is an index of 30 large publicly traded companies. It accounts for around 20% of the U.S. economy and historically it has correlated with U.S. GDP rather well. However, it might have been better to use the S&P 500, which accounts for around 75% of the U.S. economy. The S&P 500 closed at 2,160.77 yesterday. We found that a one percent increase Donald Trump’s poll numbers was associated with a 5 point (0.23%) drop in the S&P 500. Again, these results were highly statistically significant.

The margin of error for polls is typically around 3.5%. This would suggest a non-linear effect as the candidates close to within a few points of each other. We did check to see if there were significant non-linear effects within the bounds of our data and there were not. We should also point out that it is extremely unlikely that the Dow would surge to above 21,000 if Donald Trump polled zero. Arriving at this number requires extrapolation well beyond the bounds of our data.

Finally, it is tempting to attribute these results to the market’s reaction to differences in policies or leadership between the candidates. There are other explanations. For example, the risks of a Clinton presidency are fairly well known (America has had one, albeit with a different Clinton) but the risks of a Trump presidency are unknown. One interpretation consistent with our results is that the market fears the unknown.