The Bill Process through Congress

In the United States, a bill is a proposed piece of legislation to be considered by the legislature. Specifically, entities ranging from corporations, citizens, special interest groups, and anything in between, can propose an idea for a bill to a legislator. A bill must be approved by the U.S. House of Representatives,the U.S Senaten, and in the federal case, the Executive Branch in order to become a law. If a bill is enacted into law, it is then formally reassigned as an Act or a statute. 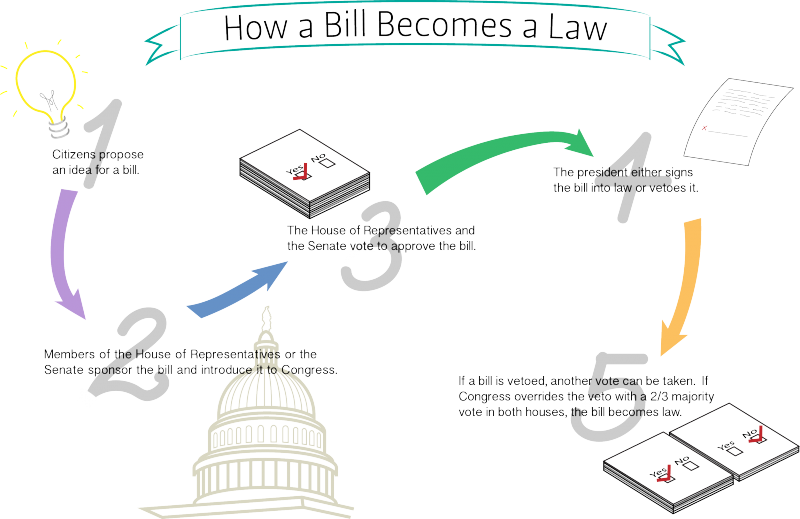 A corporation, citizen, group, or any other entity can propose an idea for a bill to a legislator as the first step to get a bill created. If the legislator is in favor of the idea, he or she researches the idea and writes it into a bill.

Since there are numerous bills proposed daily, committees composed of small groups of legislators, review the content of the proposed bill in detail. In addition, the bill needs a sponsor. Once a bill acquires this sponsor and gains the support of some other legislators, it is fit for introduction to the U.S House of Representatives

When the bill arrives at the committee, members of the committee that are experts on the bill's topics research and review the bill before voting on whether or not to send it back to the House floor. If more information on the bill is needed, committees may refer a bill to a subcommittee for further study and hearings on the piece of legislation. Hearings provide an opportunity for experts, proponents, and opposition to make their views known during the subcommittee review process. Following the hearing process, subcommittees may amend the bill prior to forwarding the piece of legislation to the full committee.

Full committees then make a recommendation to the House floor on whether or not they believe the bill should be approve or rejected. Furthermore, they may abstain from making a recommendation. The procedure is formally known as "ordering a bill reported".

If the vote indicates a majority of the Representatives are in favor of the bill, the bill officially passes in the House and is sent to the U.S Senate.

When a bill is passed by the House of Representatives, it is then referred to the Senate and undergoes a similar approval process. The Senate may approve the bill, reject it in its entirety, or propose changes.

Senators vote on bills through the method of Voice Vote. If there is a majority of Senators who vote in favor of the bill, the bill officially passes the U.S Senate and is delivered to the Executive Branch, or more specifically, the President.

Once a bill has passed through both chambers of the Legislative Branch, it is delivered to the President for a final review. The President has three possible courses of action when receiving a bill.