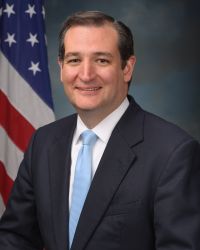 Rafael Edward "Ted" Cruz was born on December 22, 1970 in Calgary, Alberta, Canada. He is of Cuban and Irish/Italian descent. He was raised in Houston, Texas and later went on to study Public Policy at Princeton University before attending Harvard Law School. He took on the role of private-practicing lawyer, advisor to the 2000 Bush campaign, and Solicitor-General for the State of Texas (2003-2008) before being elected to the United States Senate in 2012. Cruz played a major role in the government shutdown of 2013 that strained his relations with the Republican Party. He is now running for the GOP nomination for the 2016 presidential election. Cruz's polling numbers show strong support, and he is second only to Donald Trump. (Bio)

"We will carpet bomb [ISIS] into oblivion. I don’t know if sand can glow in the dark, but we’re going to find out."(PF)

“Climate change is not science. It's religion"(CNS)

"Growth doesn’t come from government. It comes from individuals and enterprise. It comes from entrepreneurs risking capital to meet a need. Government is very effective at obstructing that creative process. If you look historically, every time we pursue out-of-control spending and taxes and regulations, the results have been stagnation and misery and malaise. And every time we pursue tax reform and regulatory reform, the result has been incredible economic growth." (TCW - TR)

"We need sound money. And I think the Fed should get out of the business of trying to juice our economy and simply be focused on sound money and monetary stability, ideally tied to gold" (RD3)

"Instead of adjusting monetary policy according to whims, and getting it wrong over and over again and causing booms and busts, what the Fed should be doing is number one, keeping our money tied to a stable level of gold, and number two, serving as a lender of last resort," (RD4)

Also take from Cruz's Webpage is his "Proven Record":

Cruz's rhetoric mainly focuses on defending the U.S. from the threat of terrorist groups that have attacked Christians and non-Muslims in other countries.

Also taken from Cruz's "Defend our Nation" Page" is his "Proven Record":