The perl script Normalizer.pl is provided with a pod-generated HTML documentation and a (CPAN clone) CSS style sheet page. The documentations below was created using the Pod::Simple::Wiki module available from CPAN and is not perfect.

Normalize Fixed Width - Converts unnormalized data, such as in files downloaded through Thomson SDC Platinum, to 3rd normal form. Processed files may be opened as tabbed delimited text files or columned spreadsheets. Ideal for database inputs, as commas in numbers, percent symbols, ampersands, and other database-averse symbols have been removed. 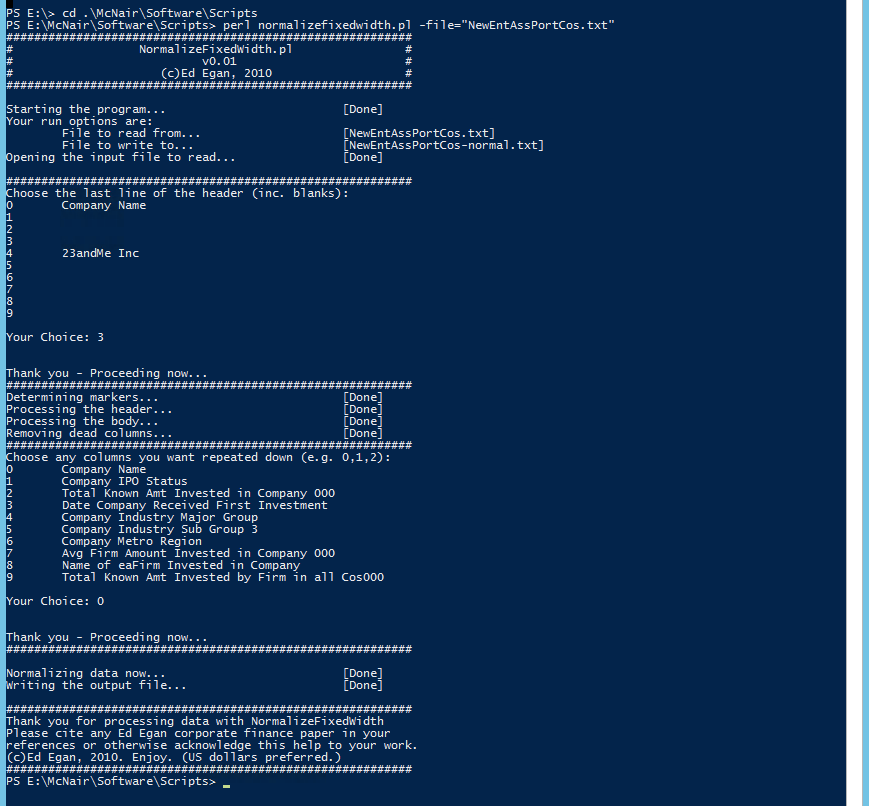 Normalizer.pl takes a tab-delimited, string-quoted textfile, such as might be made by copying and pasting an excel sheet into a text file, and creates a series of files containing the data in third normal form and suitable for import into a database.

Several major data providers, notably Thomson Financial's SDC service, use 'in cell' carriage returns to seperate multiple items of data. This makes processing of the data very difficult (without some software to help!). An example spreadsheet might look like this:

Normalize.pl will prepare tables for import into the database, in 3rd normal form, by doing the following:

The set identification is fully automatic and dictated by the data. In the example given, col1 and col2 would be assigned to the 1:1 file, while "col4 & col5" and "col3" would be two seperate sets.

A fourth test file, which was pulled in a particularly difficult format, required use of a second Perl Program to sculpt it into the proper form.

After separating Regex groups by tabs with HubsCapture.pl: