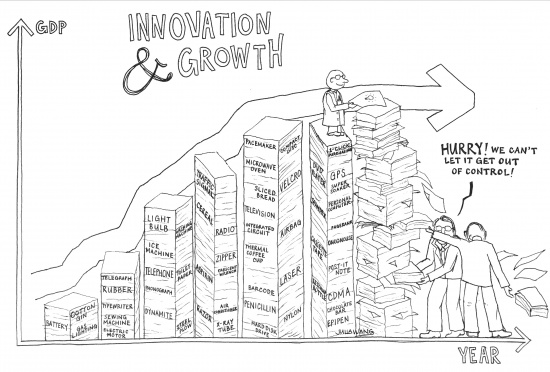 The Next Engine of U.S. GPD Growth: The Market for Ideas: Outline 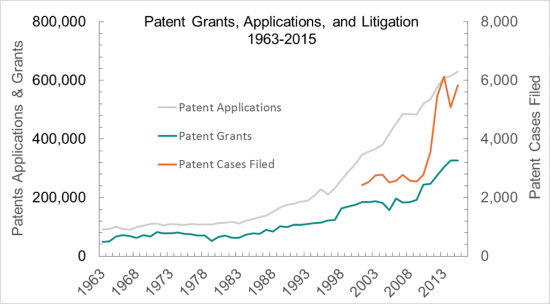 Purchases patents for defensive purposes, thereby keeping patents from being purchased from entities that will assert them against companies utilizing the technologies. Members of the aggregator pay a licensing fee so those patents cannot be asserted against them.

In 2015 there were 629,647 patent applications. Assuming history is anything to go by, around 80% will be eventually granted. Patents are valid for 20 years from application, providing renewal fees are paid at 3½, 7½, and 11½ years. Scotchmer (1999) reports that half of all patents are not renewed past 10 years. It currently takes the patent office more than 2 years, down from more than 3 years before the America Invents Act, to process a patent application. Applicants can request that undue processing time be added back to their patent terms. There are other factors, like terminal disclaimers and being found invalid or unenforceable by courts, which affect patent terms. A conservative estimate of mean patent term is 10 years from application. We will therefore use the 2.5m patents granted from 2006 to 2015 as a proxy for the number of active patents.

The trade in patents could take several forms. Patents could be sold (in part or in whole), securitized, licensed, or traded in some other fashion. The academic literature has little handle on the current scale of any of these activities. Our best estimate is that less than 5% of U.S. patents are currently licensed and that less than 50% are ever used in any way. In 2014, the rate for licensing relative to patent grants for universities participating in the Association of University Technology Managers survey was 23%. This rate has increased materially in recent years as the market for ideas gains some traction. However, universities don’t set out to create commercializable technologies. Private firms and small inventors should create patents with greater market relevance and so be able to trade at higher rates. We therefore suggest that 20% to 40% licensing rates are achievable, which would imply a difference in the percent of patents traded of between 15% and 35%.

There are no current estimates of the average number of transactions per patent. Some patents, such as those participating in some patent pools, may be licensed several thousand times. However, exclusive licenses are still very common and patent sales typically do not occur annually. A range of say 1 to 5 transactions per patent is a reasonable guess. Likewise, with so much rough estimation of other necessary numbers, no reasonable estimates of the magnitudes of spillovers is available. Innovation has strong positive externalities so the spillover factor should therefore be greater than 1. Moreover, innovation is an input into many different types of economic activity, including more innovation. This would suggest that, at least for the purposes of GDP accounting, the multiplier should be more than 2: The seller would experience the revenue from the license and the buyer would experience new revenue from the sale of a product or new innovation for which the input was necessary.

From Ideas to Assets: Investing Wisely in Intellectual Property Page 332

Data is for Universities/Academic Institutions

Jon W. Dudas Under Secretary of Commerce for Intellectual Property and Director of the United States Patent and Trademark Office USPTO 2005 Annual Report

Estimating the average transaction value is difficult. The average value of a U.S. patent is essentially unknown. Academics have suggested average values including $0.5m, $1m, $1.8m, $3.8m, and $18m (in 2016 dollars) per patent, depending on the sample being considered. However, distributions of patent values exhibit extreme skewness (driving the mean well above the median), and there are always strong sample section issues. In some sectors, like biotechnology and pharmaceuticals, intellectual property has been estimated to account for around 80% of a product’s final selling price. In other sectors, were there many hundreds if not thousands of patents are required to make a product –a smart phone may require more than 7,000 patents – estimates of the relative value of intellectual property are much more difficult. Nevertheless, taking the sales price less the manufacturing cost, with adjustment for returns to brand, market power, and other factors, would suggest that patent value accounts for around ¾ of the sales price of high-technology products.

The cost of prosecuting a patent application, inclusive of fees and legal costs, is typically estimated to be between $20,000 and $50,000, depending on the patent’s complexity. The transaction value of patents need not cover this fixed cost, even if the patent holder doesn’t commercialize the patent themselves. The aggregate revenue from a portfolio of patents should cover both the cost of prosecuting applications and the research and development cost, and provide a return on average across patent-holders. As transaction volumes increase, and as transaction costs fall with standardization of licenses, more efficient intermediaries, and generally better markets, the average transaction value will naturally decrease. An estimate of $10,000 to $100,000 per patent trade is probably reasonable.

Griliches Excerpt: "Among the patents reported to be in current use and with relevant numerical responses and a positive gain (accounting for about 20 percent of all the relevant responses), the mean value was $577,000 per patent, but the median value was only about $25,000 (implying, under the assumption of log normality, 2.5 as the coefficient of variation and a standard deviation of about $1.5 million). If one includes all the no gain, loss, and not yet used patents, the mean gain falls to about $11 2,000, and the median is close to zero or below (computed from the tables in Sanders, Rossman, and Hams 1958, pp. 355 and 357). Even this lower mean number is quite impressive, roughly equivalent to $473,000 per average patent in 1988 prices (using the GNP deflator to convert it from 1957 prices), but so also is the associated dispersion." (Griliches 309)

(Data from LexMachina and USPTO)

Data on Grants and Applications

Spreadsheet with Graphs available at: E:\McNair\Projects\Market for Ideas

Below is a table containing brief overviews of the bills pertaining to innovation that have been passed or introduced by the 114th Congress.