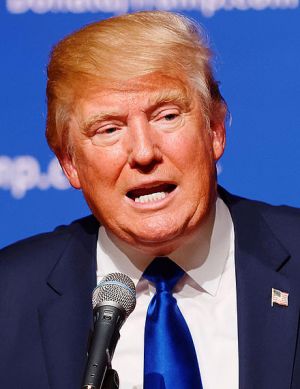 Donald Trump, born June 14, 1946 in Queens, New York City, is a real estate mogul and leading Republican nominee for the 2016 Presidential election. Prior to campaigning for the presidency, Trump hosted a television show The Apprentice (later known as The Celebrity Apprentice), and owned parts or the total of several beauty pageants, including Miss Universe. He attended Fordham University for two years before transferring to the University of Pennsylvania for a bachelor's of science in economics.[1]

Although he has switched political parties several times throughout his life, even campaigning as a Reform Party candidate in 2000, [2] he most recently identifies with the Republican party and has signed an agreement promising not to run as an Independent should he not be chosen as the Republican nominee. [3]

Trump has flipped between pro-choice and pro-life. Now considers himself pro-life. (DTS)

Trump has stated he does not drink, smoke, or use drugs.(DTI)

"Why are we striking trade agreements with countries we already have agreements with? Why is there no effort to make sure we have fair trade instead of ‘free’ trade that isn’t free to Americans?" (BB)

FiveThirtyEight did a good job gathering a lot of immigration data mentioned by Trump and then explaining it. Read it here.

"The Federal Reserve -- right now, in this world, the way we built it up -- probably has more of an impact than almost any other position, other than the couple of biggies"(HP)

Donald Trump said in an interview with the hill that the reason the federal reserve is keeping the interest rate down is because "Obama doesn’t want to have a recession-slash-depression during his administration.” (IBT). He made that claim again during a news conference saying that "They are not raising them because Obama has asked them not to raise them" (HNGN)

In an interview with the Christian Broadcasting Network, billionaire Donald Trump suggested he would ignore the First Amendment tenets of separation of church and state ands favor Christians over all other people.

"The Christians are being treated horribly because we have nobody to represent the Christians," Trump told CBN's David Brody. "Believe me, if I run and I win, I will be the greatest representative of the Christians they've had in a long time."

Trump's Call for a ban on Muslims has also been called un-American and violating the principles of separation of church and state. Trump has previously called for surveillance against mosques and said he was open to establishing a database for all Muslims living in the U.S. CNN

"Great surveillance and vigilance must be adhered to," said Trump in an additional statement Lewandowski provided to CNN. "We want to be very fair but too many bad things are happening and the percentage of true hatred is too great. People that are looking to destroy our country must be reported and turned in by the good people who love our country and want America to be great again." CNN

He called Israel America’s best and most reliable friend, and argued that it should be viewed as the cornerstone of US policy in the Middle East. He has accused Obama and US Secretary of State John Kerry of “selling Israel out,” and said that the US should do everything possible to protect and defend it. “They’ve always been there for us and we should be there for them,” he declared.

“They are the only stable democracy in a region that is not run by dictators. They are pioneers in medicine and communication and a close fair trading partner.” And, like his father, he said, he had always been loyal to Israel and “would do more for Israel than anybody else.” The Jerusalem Post

Donald Trump said that he was postponing his trip to Israel, just a day after Prime Minister Benjamin Netanyahu condemned his proposal to ban U.S. travel for all Muslims.

"Prime Minister Netanyahu rejects Donald Trump's recent remarks about Muslims," according to a statement issued by the prime minister's office.

"The State of Israel respects all religions and strictly guarantees the rights of all its citizens. At the same time, Israel is fighting against militant Islam that targets Muslims, Christians and Jews alike and threatens the entire world," the statement said. CNN

"I have decided to postpone my trip to Israel and to schedule my meeting with @Netanyahu at a later date after I become President of the U.S.," Trump tweeted. CNN

In the CBN interview, Brody also asked Trump about his message to conservative Christians.

"Well, it’s a very big message," Trump, who turns 69 next month, in his usual manner, responded. "As you know, I am Protestant. I am Presbyterian. Most people don’t know that. They have no idea. I’m proud of it. I’m very proud of it."

The Tea Party Republican was speaking primarily about the Middle East, and falsely claimed that Middle Eastern "Christians can't come into this country."

"One of the things I learned this weekend being in Iowa," Trump said, "I met with a lot of national security experts and everything else, that if you're a Christian living in Syria you can't come into this country. Yet, if you are a Muslim living in Syria, who are not under attack, they can come in."

In a written statement late Monday afternoon, the Trump campaign said the Republican frontrunner wanted a “total and complete shutdown of Muslims entering the United States until our country's representatives can figure out what is going on.” As backing, Trump cited a controversial six-month-old survey from the right-wing Center for Security Policy finding that one-quarter of U.S. Muslim respondents believed that violence against Americans was justified as part of global jihad and that a slim majority “agreed that Muslims in America should have the choice of being governed according to Shariah.”

QUOTES FROM TRUMP ON BAN