This page details the build of our DIGITS DevBox. There's also a page giving information on Using the DevBox. nVIDIA, famous for their incredibly poor supply-chain and inventory management, have been saying "Please note that we are sold out of our inventory of the DIGITS DevBox, and no new systems are being built" since shortly after the Titax X was the latest and greatest thing (i.e., somewhere around 2016). But it's pretty straight forward to update their spec.

The documentation from NVIDIA is here:

However, unfortunately, the form to get help from NVIDIA is closed [1][2][3]. And most of the other specs are limited to just the hardware [4][5][6][7]. The best instructions that I could find were:

The DevBox is currently unavailable from Amazon [8], and at around $15k buying one is prohibitive for most people. Some firms, including Lamdba Labs [9], Bizon-tech [10], are selling variants on them, but their prices are high too and the details on their specs are limited (the MoBo and config details are missing entirely).

But the parts cost is perhaps $4-5k now for the original spec! So this page goes through everything required to put one together and get it up and running.

We mostly followed the original hardware spec from NVIDIA, updating the capacity of the drives and other minor things, as we had many of these parts available as salvage from other boxes. We had to buy the ASUS X99-E WS motherboard (we got the ASUS X99-E WS/USB variant as the original wasn't available and this one has USB3.1), as well as some new drives, just for this project. 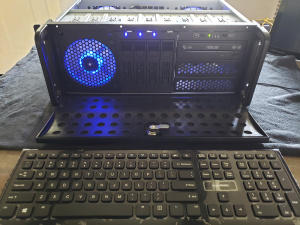 We opted to use a Xeon e5-2620v3 processor, rather than the Core i7-5930K. We had both available and both support 40 channels, mount in the LGA 2011-v3 socket, have 6 cores, 15mb caches, etc. Although the i7 has a faster clock speed, the Xeon takes registered (buffered), ECC DDR4 RDIMMs, which means we can put 256Gb on the board, rather than just 64Gb. For the GPUs, we have a TITAN RTX and an older TITAN Xp available to start, and we can add a 1080Ti later, or buy some additional GPUs if needed. We also put the whole thing in a Rosewill RSV-L4000 case.

Old notes on a prior look at a GPU Build are on the wiki too. 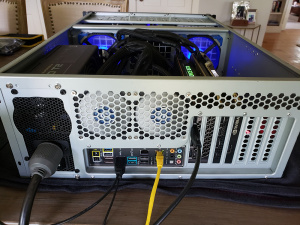 There weren't any particularly noteworthy things about the hardware build. The GPUs need to go in slots 1 and 3, which means they sit tight on each other. We put the Titan Xp in slot 1 (and plugged the monitor into its HDMI port), because then the fans for the Titan RTX (which we expect will get heavier use) are in the clear for now. The case fans were set up in a push-and-pull arrangement, and the hot-swap bay was put in the center position to allow as much airflow past the GPUs as possible.

The initial BIOS boot was weird - the machine ran at full power for a short period then powered off multiple times before finally giving a single system beep and loading the BIOS. It may have been memory checking or some such.

We did NOT update the BIOS. It didn't need it. The m.2 drive is visible in the BIOS and will be used as a cache for the RAID 5 array (using bcache). The GPUs are recognized as PCIe devices in the tool section. And all of the SATA drives are being recognized.

We then made the following changes:

What's really crucial is that all the hardware is visible and that we are NOT using UEFI. With UEFI, there is an issue with the drivers not being properly signed under secure boot.

Install Ubuntu 18.04 (note that the original DiGIT DevBox ran 14.04), not the live version, from a freshly burnt DVD. If you install the HWE version, you don't need to run apt-get install --install-recommends linux-generic-hwe-18.04 at the end.

Choose the first network hardware option and make sure that the second (right most) network port is connected to a DHCP broadcasting router. 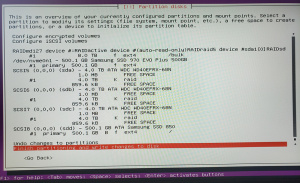 Install SSH and Samba. When prompted, add the MBR to the front of the 850.

After a reboot, the screen freezes if you didn't install HWE. Either change the bootloader, adding nomodeset (see https://www.pugetsystems.com/labs/hpc/The-Best-Way-To-Install-Ubuntu-18-04-with-NVIDIA-Drivers-and-any-Desktop-Flavor-1178/#step-4-potential-problem-number-1), or just SSH onto the box and fix that now.

Give the box a reboot!

If you install the video driver before installing Xwindows, you will need to manually edit the Xwindows config files. So, now install the X window system. The easiest way is:

And reboot again to make sure that everything is working nicely.

The first build of this box was done with an installation of CUDA 10.1, which automatically installed version 418.67 of the NVIDIA driver. We then installed CUDA 10.0 under conda to support Tensorflow 1.13. All went mostly well, and the history of this page contains the instructions. However, at some point, likely because of an OS update, the video driver(s) stopped working. This page now describes the second build (as if it were a build from scratch). Addressing Ubuntu NVIDIA Issues provides additional information.

Check the hardware is being seen and what driver is being used with:

Currently we are using the nouveau driver for the Xp, and have no driver loaded for the RTX.

You can also list the driver using ubuntu-drivers, which is supposed to tell you which NVIDIA driver is recommended:

But the 390 is the only driver available from the main repo. Add the experimental repo for more options:

Then blacklist the nouveau driver (see https://docs.nvidia.com/cuda/cuda-installation-guide-linux/index.html#runfile-nouveau) and reboot to a text terminal so that it isn't loaded.

Essentially, first install build-essential, which gets you gcc.

Then run the installer script and DO NOT install the driver (don't worry about the warning, it will work fine!):

Now fix the paths. To do this for a single user do:

But it is better to fix it for everyone by editing your environment file:

With version cuda 10.0, you don't need to edit rc.local to start the persistence daemon:

Instead, nvidia-persistenced runs as a service.

And change into the sample directory and run the tests:

Everything should be good at this point!

The RAID5 array is set up and mounted as /bulk. We need to add the cache on the m.2 drive. Begin by installing bcache:

See what we have:

The m.2 is not mounted. This can be seen by checking lsblk (or mount or df):

Check the mdadm.conf file and fstab:

Note that the second UUID refers to /dev/md0, whereas the UUID in the contents of mdadm.conf is the UUID of the 3 RAID5 drives together:

Note we have an active RAID5 array:

Instructions for taking apart and/or (re-)creating a RAID array are here:

Instructions on building a bcache are here:

Wipe the both m.2 and the RAID5 array:

Make the bcache, formatting both drives (md0 as backing, m.2 as cache). Note that when you do it one command the assignment is automatic.

If you screw up, cd to /sys/fs/bcache/whatever and then ls -l cache0. If there is an entry in there echo 1 > stop. This unregisters the cache and should let you start over.

Check the new bcache array is there, format it and mount it:

Now we need to update fstab (see https://help.ubuntu.com/community/Fstab) with the right UUID and spec:

And update your boot image and give it a reboot to check the new bcache array comes back up ok:

These instructions are taken from the Research_Computing_Configuration#Samba page with only minor modifications. This guide is helpful: https://linuxconfig.org/how-to-configure-samba-server-share-on-ubuntu-18-04-bionic-beaver-linux

Then fix the conf file:

Test the parameters, change the permissions and ownership:

And add users to the samba group (if not already):

Then follow https://github.com/NVIDIA/nvidia-docker#quick-start to install docker2, but change the last command to use cuda 10.0

Finally run DIGITS inside a docker container (see https://github.com/NVIDIA/nvidia-docker/wiki/DIGITS for other options):

Note: you can kill docker containers with

Documentation on installing cuDNN is here:

First, make an installs directory in bulk and copy the installation files over from the RDP (E:\installs\DIGITS DevBox). Then:

Now install Anaconda, so that we have python 3, and can pip and conda install things. Instructions for installing Anaconda on Ubuntu 18.04LTS (e.g., https://docs.anaconda.com/anaconda/install/linux/) all recommend using the shell script.

From https://www.anaconda.com/distribution/ the latest version is 3.7, so:

As user researcher, run the installation (this installs python 3.7.3):

Note: to deactivate the virtual environment:

Note that adding the anaconda path to /etc/environment makes the virtual environment redundant.

Run the following as researcher (in venv):

The following are not yet installed:

Theano v.1 requires python >=3.4 and <3.6. We are currently running 3.7. If we decide to install theano, we'll need to set up another version of python and another virtual environment. See:

In order to use the graphical interface for Matlab and other applications, we need a VNC server.

First, install the VNC client remotely. We use the standalone exe from TigerVNC.

Note that changing the color depth breaks it!

To make changes (or after the edit)

Stop the server with

Note that we are using :2 because :1 is running our regular Xwindows GUI.

Instrucions on how to set up an IP tunnel using PuTTY:

Coming back to this, I had issues connecting. I set up the tunnel using the saved profile in puTTY.exe and checked to see which local port was listening (it was 5901) and not firewalled using the listening ports tab under network on resmon.exe (it said allowed, not restricted under firewall status). VNC seemed to be running fine on Bastard, and I tried connecting to localhost::1 (that is 5901 on the localhost, through the tunnel to 5902 on Bastard) using VNC Connect by RealVNC. The connection was refused.

I checked it was listening and there was no firewall:

The localhost port seems to be open and listening just fine:

So, presumably, there must be something wrong with the tunnel itself.

This gave a dead session (a flat light blue screen with nothing on it), which finally yielded a connection log which said "login successful for display 10, start connecting, connection problems, giving up, some problem."

There could be some conflict between VNC and RDP. systemctl status xrdp shows "xrdp_wm_log_msg: connection problem, giving up".

I tried without success:

There is clearly an issue with Ubuntu 18.04 and XRDP. The solution seems to be to downgrade xserver-xorg-core and some related packages, which can be done with an install script (https://c-nergy.be/blog/?p=13933) or manually. But I don't want to do that, so I removed xrdp and went back to VNC!

I installed the community edition of PyCharm:

On launch, you get some config options. I chose to install and enable:

Make a launcher: In /usr/share/applications:

Also, create a launcher on the desktop with the same info.