Since university system file for patents out of a central office, its mot possible to determine where the research was conducted. This presents problems when ranking universities by patent production.

In order to publish this paper as a Baker Institute Research Report, we will need to do more to resolve this issue beyond weighting for the University of California.

We propose using public data from the Carnegie Classifications of Institutes of Higher Education to resolve the university systems issue.

TASKS: 1) Separate schools affiliated with universities/university systems in our rankings from all others included in Carnegie data.

2)Group these by system.

4) Determine the total count of the categories in number 3 for each university system.

5) Use total count to weight regressions

Goal: list of all universities and # of patents associated with each university and patent licensing activity

patent reassignment to startups associated with these universities

identify list of universities: board of regents, universities in patent data (find patterns associated with university assignees) -- @Julia: Where did we get this list? I'd love to be able filter by country - Meghana

BOARD OF REGENTS - pretty much exclusively describes universities

What to get from other people

Avesh has clinical trial data on wiki and bulk drive (FDA Trials Data), need to build it into normal form, use clinical trials data to rank R&D engagement of universities, will be building up portfolios of different types of companies

Marcela is cleaning up patent data, has given patent assignee names -- got it! Could we filter by country and get strictly American names?

Catherine has zip codes of medical centers, use to look through patent data

Thursby, J. & Thursby, M.: Who Is Selling the Ivory Tower? Sources of Growth in University Licensing (2002) 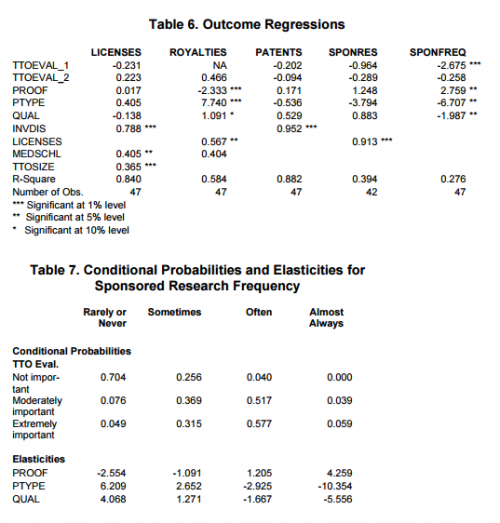 Thursby, J., Fuller, Thursby, M.: US Faculty Patenting: Inside and Outside the University (2009)

The Bayh-Dole Act and High-Technology Entrepreneurship in U.S. Universities: Chicken, Egg, or Something Else? (2004)

and commercialization by industry—instead, academic research informs the methods and disciplines employed by firms in their R&D facilities."

2. Gallium Nitride: a semiconductor with both military and commercial applications (University of California).

5. Soluble CD4: a prototype for a drug to fight AIDS (Columbia University).

Specific for German case, but certain points can help us

Matched authors of scientific publications and inventors on patents

Names: To keep precision high, leave out names with initials only

Singh A. and Wong P.K: University patenting activities and their link to the quantity and quality of scientific publications (2009)